Note: Sekiguchi Ichiro recently passed away, but his legacy lives on. The coffee world is forever indebted to him. I hope this article can help preserve his memory and keep his legend alive.

Café de L’ambre is kissaten (coffeehouse) just off the main drag in Ginza. Since 1948 this dark and quiet cafe has been pushing the limits of coffee. It’s a place stuck out of time. A place that serves 40 year old coffee prepared meticulously. A place that breaks the rules and shatters expectations.

Its owner, Sekiguchi Ichiro is over one-hundred years-old. It would be easy to assume that an old cafe, run by an old man, serves old-fashioned coffee in an archaic way. However, nothing could be further from the truth. Sekiguchi is a man who has constantly searched for a better way. If he saw an opportunity to improve a process, he took it. If a tool was needed, but didn’t exist, he made it. He is a trailblazer and a rogue genius.

I sat down at the old wooden counter—which curves around the barista’s workspace—and ordered a cup of coffee, Mexican in origin and harvested in 1972. After confirming that I want it black and without sugar the server yelled out the order. The beans were weighed out on a scale. A real scale—One with sliding weights and everything— They were ground in a mysterious and eerily quite orange box that boasted the Café de L’ambre logo. Then 17 grams of coarsely ground coffee were packed into a flannel filter and 70 grams of water were slowly and carefully poured through.

A small cup and saucer were placed in front of me and the barista poured the tiny amount of coffee, out from what appeared to be a metal sauce pan, into the cup. I looked at my little drink and then sipped at it gingerly. It was rich and creamy in mouthfeel, and had a round chocolatey flavor with strong notes of plum and dried fruits. It had an apple like acidity and a sweet lingering aftertaste. It was definitely coffee, but it was so much more.

I began to ask the barista questions about their preparation, their tools, and their aging process. He ushered me over to a small cubby to the side of the entryway and instructed me to ask the owner, Mr. Sekiguchi.

(note: parts of this interview have been paraphrased for brevity and clarity. The interview was conducted in Japanese and was adapted to English by the author.)

How long have you been working with coffee?

What made you decide to start your own kissaten?

I started off as an engineer. I worked with movie equipment, namely projectors. I loved coffee so I started studying it as a hobby. I would experiment with roasting and brewing techniques and sometimes even make coffee for guests who came to our office. Many people said it was the best coffee they had ever had. Seeing them enjoy the coffee, the looks on their faces… it was wonderful. It made me want to pursue coffee.

When did you start aging beans before roasting and why?

Why? Because I think it tastes good. I’ve been aging beans for about 40 years or so now. It was initially an accident. I thought Sumatran Mandheling coffee was good. There was a supplier in Germany that had it for sale, but then the war began, so they couldn’t ship it to Japan. They were going to send it by train through Siberia, but relations between Russia and Germany went bad… Anyway, about five years later it got here and I had to buy it through the black market. I roasted it and it tasted excellent.

There was another time, too, that someone had a coffee sample on a shelf somewhere and forgot about it. By the time they gave it to me it was quite old. I roasted it and it, too, was excellent. I started to think that aging coffee beans was a good idea, so I made an airtight  storehouse out of stainless steel, bought all the best coffee I could find, and put it in there to age. In total I aged about two tons. Some aged great, some ended up flavorless.

I’ve worked through almost all of that initial coffee now. It’s been harder and harder to get ahold of top quality coffee for a small shop like mine.

What is the oldest bean you are aging right now?

Do you roast everyday?

How much coffee do you drink everyday?

Two to four cups. It depends on my mood. I taste a lot of coffee though, for quality control purposes.

What kind of coffee do you drink?

That, too, depends on my mood. Sometimes I want something bitter, sometimes something acidic. I like all coffee.

I’ve heard that you invented a kettle. Is that true?

I did invent a kettle. I had one made. I have a patent on it too. I think it’s the best kettle for making coffee. The base is wide, but it narrows at the top. It gives excellent control. I also had a grinder custom built, and customized the internal mechanics of my roaster.

Is there anything else you designed?

Yes, our coffee cups. I had very thin ceramic cups made. I think that it feels better against your lips and adds to the experience of drinking coffee.

You are something of a celebrity in the coffee world these days, what do you think of that?

A lot can be learner from a person like Mr. Sekiguchi. It is inspiring to see his passion for quality coffee and his lifelong drive to improve. The coffee served at his cafe is something different. It doesn’t fit neatly into any category. It’s a mysterious blend of tradition and innovation. It’s something worth experiencing. 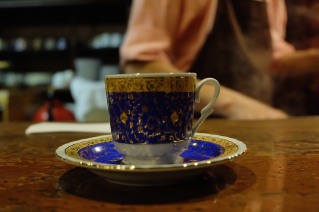