Jimbocho isn’t a major train hub. There aren’t throngs of young and fashionable Tokyoites roaming the streets and ducking into boutiques nearby. There are, however, many stores selling used books as well as hundred-year-old noodles shops. There’s a unique flavor to the town; It’s a combination of old independent store fronts and business buildings. Here in Jimbocho, in the shadow of office towers, is Glitch Coffee & Roasters.

Though Glitch is a relatively new coffeeshop it feels older and more comfortable. It’s a sort of modern coffeeshop built into a well-seasoned building. The design is simple and straight forward; It’s all windows and concrete. This minimalistic design feels very  current, but the decor a bit more traditional.  Old books are arranged here and there by the point of service—one of which contains the coffee menu— and pay homage to Jimbocho’s famous used book  stores. There are parts of the store that feel like a kissaten (A traditional Japanese coffeehouse),  the copper kettles that are used for pour-overs and bits of well-worn furniture add to the nostalgic atmosphere.

The coffee at Glitch is roasted light. They offer several varieties in shop, but stick to single origin coffees rather than blends of beans. Depending on the origin of the coffee, flavors like cherry, orange juice, black tea, and even tomato juice are present. The preferred brewing method is pour-over prepared via glass Hario V-60s.  Espresso too is available, and is made on a La Marzocco Linea PB espresso machine. It’s clear that the roast style is influenced by countries like Norway and Australia, but owner Suzuki Kiyokazu says he wants to promote Japan’s own coffee culture.

Japan, though often looked at as a tea-loving country by the West, has a long and interesting relationship with coffee. Long before the third-wave style made coffee an artisanal beverage, baristas in kissaten obsessed over making the perfect cup. Things like the pour-over and the goose-neck kettle were perfected in Japan. Suzuki is proud of this history and wants to keep Japan on the coffee map. He is proud to say that about 80% of the coffee they sell are pour-overs. 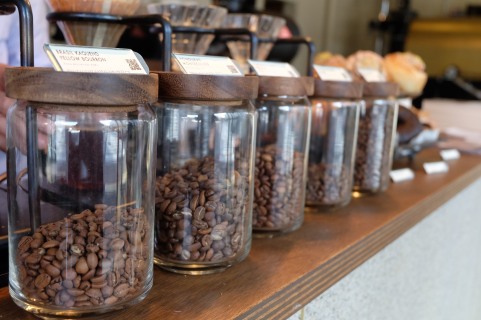 Glitch Coffee’s mission of spreading both Japanese coffee culture and top-quality beans seems to be going well, and recently they opened a second location in West Shinjuku called Counterpart Coffee Gallery. Suzuki explains that he avoids trendy areas because he doesn’t want to sell trendy drinks. He wants his customers to appreciate the coffee for what it is. He’s hoping to expand Glitch a bit more in the future, with the goal of not only spreading his style of coffee, but also supplying full-time work to people who are passionate about coffee.

The name Glitch comes from the idea that good things can come from mistakes. Suzuki likes the idea that people can learn from their failures and discover amazing things in their errors. This concept goes hand in hand with Glitch’s share-roasting program. Suzuki opened his doors to other cafe owners who want to roast coffee on his 5kg Probat Roaster, or buy crops of beans together. There is no insistence on roasting in a specific way, and sometimes a new roaster’s supposed failure can turn out to be something remarkable. The ideas behind Glitch have a certain romance to them. 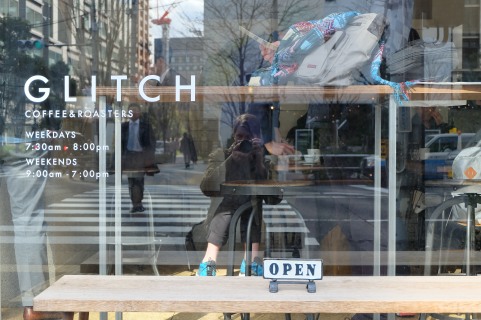 The coffees served in shop have the unique flavors of their home countries, brought out by careful roasting. The cafe itself too has a unique flavor, one brought out by a new generation of Japanese coffee professionals. This melding of flavors, one paying respect to the product and the other paying homage to the past and present of Japanese coffee, make for a fantastic cup of joe.