If you’re like me then you’ve spent a bit of time browsing the coffee related hashtags on Instagram. While looking through images of latte art, aerial shots of arranged coffee mugs, and intense looking baristas, I stumbled upon @ArtisanSmith. Chances are you’ve come across a picture of a cool kettle he’s crafted, or a stunning espresso machine customized by him and it’s peaked your interest. For me it was a copper press based on the AeroPress design. Sure, it was pretty, but also it was daring. I mean, who would ever try to make such a thing? So, I began to follow the account. Day after day pictures of beautiful handmade coffee equipment showed up and I began to dream of a future where my own coffee lab was full of these beautiful tools.

A Meeting That Almost Didn’t Happen

One day I was surprised to find a message on my own Instagram account from the ArtisanSmith. It read something like “I’m thinking of coming to Tokyo, any cafe recommendations?” I shook off my star-struck excitement and started a correspondence with Charlie, the artisan smith of ArtisanSmith . Before I knew it he was in Tokyo and I was rushing off to meet him. It was a meeting that almost didn’t happen. A rare heavy snow in Tokyo delayed trains severely and after being crammed in commuter hell for two hours I found the cafe we had set to meet at being shuttered. Nervously I asked if a man named Charlie has come by. They told me he had. My heart dropped. They told me that they had recommended a cafe a few stations up the line to him and he had left recently. I dashed to the station and soon after I found Charlie ordering a pour-over at Onibus Coffee.

The Man Behind the Craft

As Charlie eagerly asked questions about coffee in Tokyo and pointed out numerous architectural feats I asked him questions about his life and his work.  And over numerous cups of coffee and espresso this craftsman had an interesting story to tell:

There are a few things that you notice about Charlie immediately. He isn’t interested in sitting still for long. He’s constantly looking around and is full of questions and observations. He is curious by nature and excited to explore. He’s happy to tell you what he knows and not embarrassed to ask about what he doesn’t. Finally, he is charmingly proud. He’s isn’t the kind of guy to rub any success he’s had in your face, rather he talks about his accomplishments in the same eager but bashful way a father talks about his child. There is a visible love for the work he is doing.

Charlie immigrated to Australia from Vietnam as a refugee when he was 10 years old. When deciding what to do in their new home country his family settled on a Vietnamese Bakery. It wasn’t long before coffee became just as important to their business as baked goods. After all, what’s a pastry without coffee? After years of hard work the family did well for themselves and had number of cafes in the Sydney area. Charlie had developed a love for coffee and decided it was time to start his own coffeeshop and began to make his plans. The problem was that opening a cafe ins’t cheap. The solution? He began to study carpentry and anything else he needed to know about building a cafe and made it himself.

This experience taught him that he had a talent for creating things with his hands. He built more cafes and even began to build homes. Creating beautiful spaces became something of a passion for him. In his own cafe he began to find ways to apply his talent often. Sometimes he would get a request from one of his staff members to improve on a tamper or a kettle and he would try his hand at it. It wasn’t long before these requests expanded out of his own shop. Charlie found himself making coffee tools for other barista friends and word began to spread.

Giving Back to the Coffee Community

Charlie and his family built a life for themselves around coffee. It’s something that he is truly grateful for. As he enjoyed some success with his own coffee business he began to think about how others would enjoy his hand-made coffee goods. He trained a small crew and began ArtisanSmith. His goal was to continue to create beautiful and functional products that coffee enthusiasts could afford. Sure, he could charge double for many of the things he sells, but that’s not the point of ArtisanSmith. In his craft he had found a way to contribute something unique to the coffee community. This is Charlie’s way of giving back to the industry that he owes so much to.

Right now ArtisanSmith is driven by two forces: Contributing to the coffee community and finding new challenges. The copper press I mentioned before has amazing heat retention due to its material and was no easy task to create. Products like this are the combination of this drive. It’s clear that Charlie is excited by coffee and creativity. So keep your eye on that Instagram and expect great things. 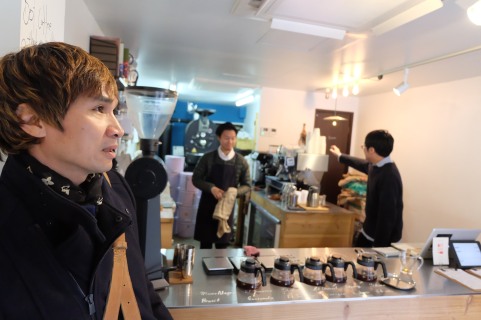